Through the eyes of a 5 year old: Cooking with Alex pt 4
191
post-template-default,single,single-post,postid-191,single-format-standard,bridge-core-3.0.5,qode-page-transition-enabled,ajax_fade,page_not_loaded,,qode-title-hidden,qode-theme-ver-29.3,qode-theme-bridge,wpb-js-composer js-comp-ver-6.10.0,vc_responsive

Continue with Intern Laura Bartee as she details the final post in a four part series on a cooking lesson Robin hosted.

Recently Robin hosted a cooking lesson for a five year old little girl named Alex for her birthday. If you missed the three healthy desserts we made, click to see the blogs detailing how Alex made Chocolate Covered Bananas with Almonds, Baked Apples and a Summer Trifle.

Cooking with Alex was so much fun, but that fun didn’t end with the three desserts. Alex had two more activities planned that DIDN’T involve cooking.

First – Alex and Laura commemorated her recipes by decorating them with scrapbooking paper. Alex picked two decorate scrapbook pages per recipe, which Laura put together for her. Having these recipes decorated with pretty papers of Alex’s choice meant these recipes became an important possession for her – one that she is likely to keep and display for others. Now her recipes can be taken home with her and enjoyed in the future, along with memories of her fun cooking experience. 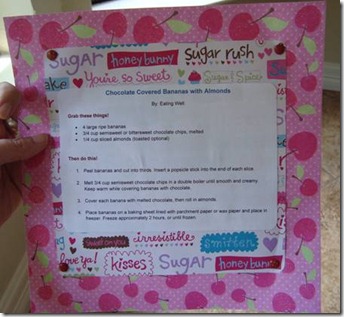 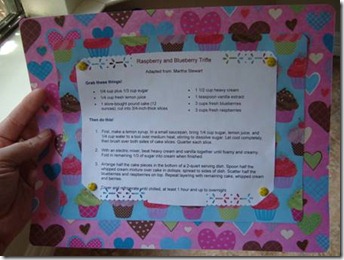 The second activity Alex participated in was flipping through Boddler Bites Food in a Flash cards with Robin. These cards have multiple foods for each letter of the alphabet on a card. As Robin showed foods to Alex, Alex replied if she liked the food or not. Many foods Alex had liked and tried, though some she said, “eww” to immediately. As Robin asked why she thought that food was, “eww” they were able have a conversation about foods she had tried and not liked, or foods she perceived as tasting bad that she hadn’t tried.

The cooking lesson was extremely fun for both Robin and Alex. Alex learned to make three new healthy desserts and tasted some new foods! Robin was able to focus the cooking lesson on a few important lessons she wanted Alex to learn. Some of these lessons were:

1. Fruit is a sweet treat on its own, but can also become the base of a dessert that doesn’t need a lot of extra sugar added. Dessert can be healthy, especially when made with fresh fruits.

2. Alex learned new cooking techniques – such as chopping walnuts with an age appropriate tool – a plastic knife. She learned to melt chocolate in a double boiler, while under supervision. She was able to participate in the cooking process, making her feel connected to the recipe and likely to want to make it again. 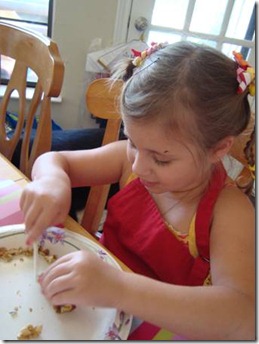 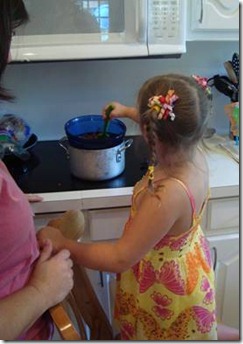 3. Alex’s senses were exposed to new flavors and textures, which is important for children (and adults!) to experience to expand their palete. Alex had never tried walnuts or almonds before and found she liked walnuts, but was unsure about the almonds. Smelling the cinnamon, nutmeg and vanilla were new to her nose and allowed her to “preview” some of the flavors she would be tasting in the finished dessert. Tasting the whipped cream while it was being sweetened taught Alex the process of adding sugar slowly and how sugar affects the flavor of the cream.

4. Robin encouraged Alex to complete parts of the recipe herself – even when she thought she couldn’t do it. She dipped the bananas into the chocolate and grated the nutmeg for the Baked Apples. She mastered the stuffing of the filling into the apples and decorated the berry trifle without any assistance. Alex saw each task through to the end, which is an important lesson for anyone. 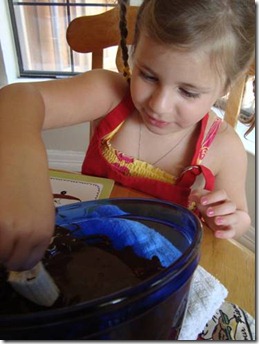 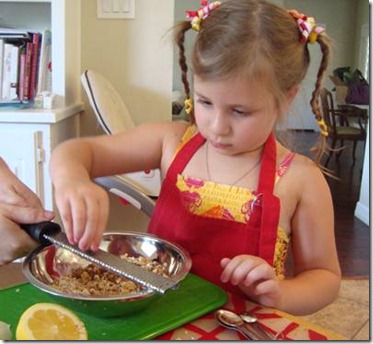 5. Honoring hunger was taught to Alex through eating a healthy lunch prior to the cooking lesson and trying small samples of each recipe made. She knew when her tummy was full and was happy to take home the leftovers to share with her family. Dessert can be enjoyed in moderation, which was emphasized during the cooking lesson.

6. Most importantly, Alex was taught how to cook and be interested in preparing healthy and fresh foods!

This cooking lesson was a great experience for Robin, Alex and Laura. If you have any suggestions or experiences with cooking lessons for children, feel free to share them in the comments below!