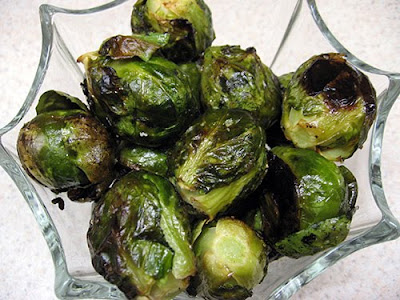 The brussel sprout, a member of the cruciferous vegetable family (you know, broccoli, cauliflower, cabbage) has finally made it onto the scene with avengence. Look at recipe websites, menus of top tier restaurants, grocery stores that now carry the entire stalk of sprouts all way to microwavable, ready made bags of the goodies. I remember brussel sprouts in the freezer growing up-only for my Dad-as he was the only one who like them. They made an appearance every once in a while, but not as often as Dad would have liked.

A month ago, I bought a bag of frozen brussel sprouts in honor of expanding my cooking horizons and in honor of dear old Dad. That bag is still sitting in the freezer. Yesterday, I bought one of the microwavable, ready made bags at the grocery store. That bag is now gone. Instead of microwaving it, I heated about 2 teaspoons of olive oil in a non stick pan, cut the bottom of the sprout off, cut it half and sauteed them for about 10 minutes. Seasoned with salt and pepper. I have to say they were the most delicious things I’ve had in a while. They caramelized well and looked beautiful on the plate next to roasted chicken and a baked sweet potato. So delicious! I was even able to get my husband to try one! (Try moving a mountain!). It’s an on going effort to find veggies he enjoys. The fact that he tasted it is big news.

I’m ready now to tackle the bag of frozen sprouts to see how they hold up during the same cooking process. Obviously, they are less expensive than the microwavable ready made ones, so if they work just as well, I’ll be using them until it’s sprout season.

I can’t encourage you enough to put these little nuggets of nutritional goodness on your grocery list and just give them a try. You’ll be shocked at how tasty they are and you’ll wonder what took you so long to prepare them at home!

Tell me, what other ways do you prepare brussel sprouts?