11 Feb Lessons of the Square Watermelon

Posted at 16:08h in Fruits and Veggies by Cornell Care 2 Comments
Share

Lessons of the Square Watermelon 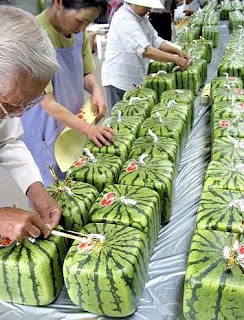 Believe it or not, this comes from a forwarded email that I received from a friend. More than likely, she sent it for the “change is possible” message. I’m posting it for that message as well as the square watermelon message. Fascinating!

Japanese grocery stores had a problem. They are much smaller than shops in the USA and therefore don’t have room to waste. Watermelons, big and round, wasted a lot of space. Most people would simply tell the grocery stores that watermelons grow round and there is nothing that can be done about it.

That is how majority of people would respond. But some Japanese farmers took a different approach. If the supermarkets wanted a square watermelon, they asked themselves, “How can we provide one?” It wasn’t long before they invented the square watermelon.
The solution to the problem of round watermelons was not to solve as the farmers did not assume it was impossible – and simply asked how it could be done.

They found out that if you put the watermelon in a square box when they are growing, the watermelon will take on the shape of the box – and grow into a square fruit. This made the grocery stores happy and had the added benefit that it was much easier and cost effective to ship the watermelons. Consumers also loved them because they took less space in their refrigerators which are much smaller than those in the US meaning that the growers could charge a premium price for them.

The lesson lies within the process. Here is the take home message for anyone considering change in their life:
1. Don’t Assume
2. Question habits
3. Be Creative
4. Look for a Better Way
5. Impossibilities often aren’t 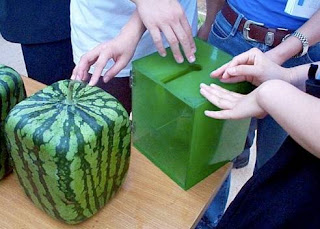