23 May How Hubbard, Muffett, the Pumpkin Eater and Dumpty Spin Kid Food 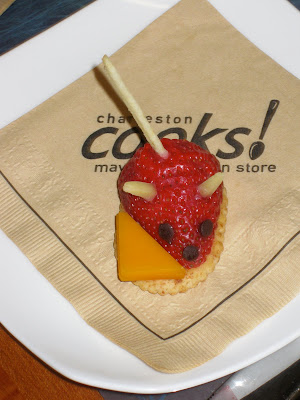 I must say that I love how many nursery rhymes make reference to food. It’s never too early to introduce children to food via song, book, taste, touch, smell and feel.

I have a question for you. Have you ever really listened to the nursery rhymes you grew up singing or perhaps now sing to your own children? Several, I’ve found, are extremely violent, have sad endings and would otherwise give valid reason for lock up and/or a lifetime of therapy. Below are just a few examples. (note that all are not food related)

Three Blind Mice. See how they run…they all ran after the farmer’s wife who cut off their tails with a carving knife…wouldn’t that be consider terms for arrest? I was informed recently that some people now say that she cut of some cheese (which illicits giggles for some) with a carving knife instead. Much more kid friendly.

It’s Raining, It’s Pouring. Old man-snoring-went to bed and bumped his head and basically died? Terrifying for children whose parents are snorers!

Rock a Bye Baby. What is a cradle doing in a tree? Of course when the wind blows the cradle will rock and that cradle and the baby will come crashing down. How is that comforting?

Peter Peter Pumpkin Eater. Had a wife and couldn’t keep her..put her in a pumpkin shell and there he kept her very well? She lived in a pumpkin shell? Isn’t that like jailing your own wife? I supposed a pumpkin wouldn’t be the worse place to be kept, but seriously-why couldn’t Peter be the one in a gourd?

Old Mother Hubbard. Had a dog-went to get a bone-cupboard was bare-dog goes hungry because Mom Hubbard forgot to get dog food and bones at Petsmart when she was out today? The dog can’t have people food for one day? Come on, Hubbard! This is an extreme situation.

Little Miss Muffet. Sat on a tuffet eating curds and whey. Great snack, right? Then the spider came down beside her and scared her to death! Let’s try to teach our kids to be tolerant of all insects, people! Now she’s never going to eat curds and whey again because of the association with spiders.

Sigh……I have to leave you with a recipe that ties in delightfully to this post-one that I learned at the Charleston Cooks Maverick Kitchen Store in Charleston, South Carolina.

1. Cut a small slice on the bottom of each strawberry to create a flat bottom.
2. Press a mini chocolate chip on the tip for a nose. Press two chips above the nose as ears.
3. Press 2 almond slivers into the top to serve as ears
4. For the tail, push in a shoestring potato (an almond sliver can also be used)
5. Serve on top of crackers with a small wedge of cheese